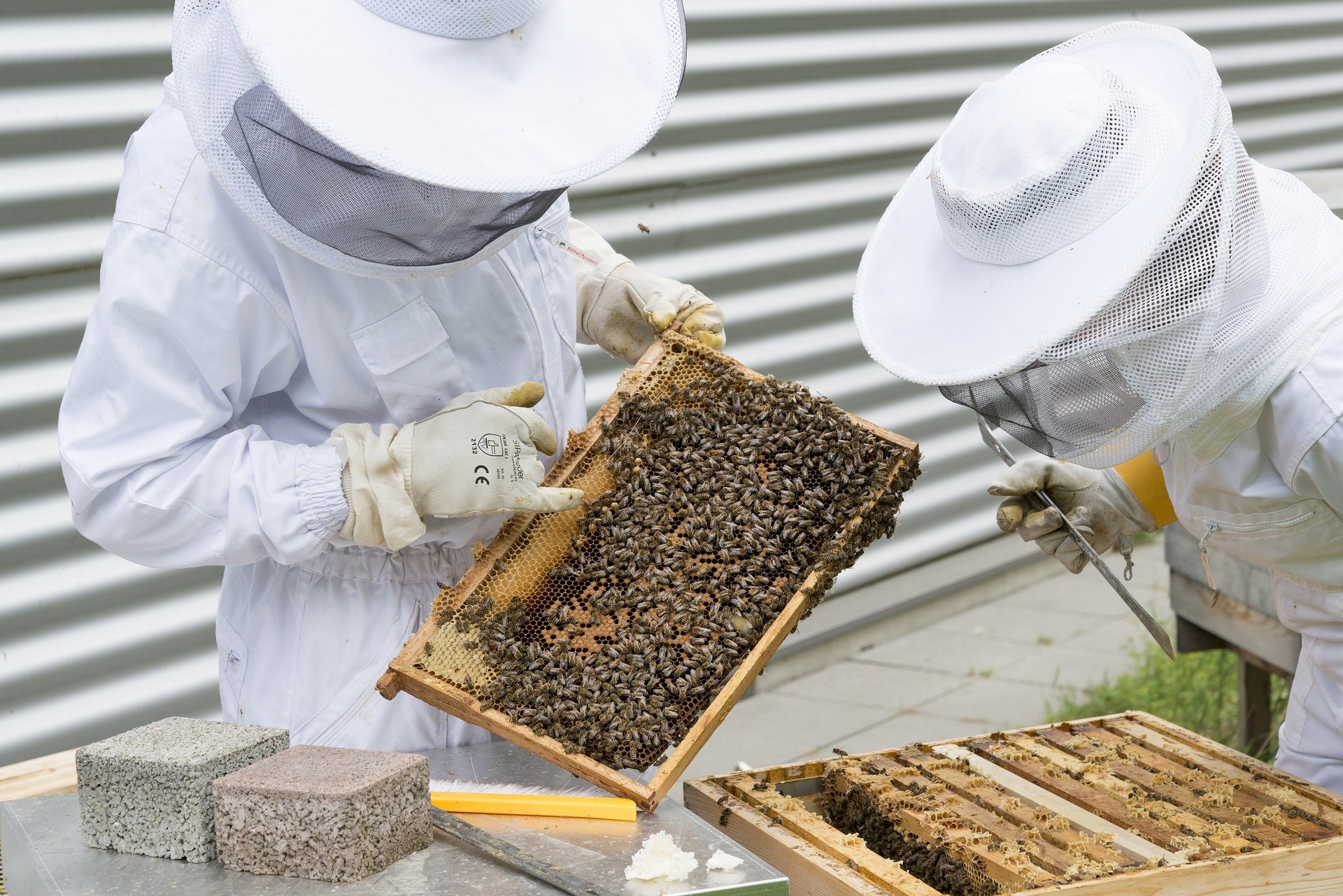 We’ve come up with a list of 15 beekeeping innovations throughout history that has developed the industry to what it is today.

Beekeeping has become an extremely profitable enterprise for a lot of people. There are literally hundreds of ways to develop a beekeeping business and it’s important to pick out the ones that are most appropriate for your particular circumstances.

If you’re not in the industry, it’ll still be an interesting read and will give you a lot of insight into how people have raised bees for honey and brought the product to the markets and into your home.

Some of the most expensive honey in the world is still being produced using time-tested techniques developed in ancient Egyptian times. During those times beehives were being stacked up to 10 feet to produce a structure that would incorporate about 400 hives. The frame was made up of wood or metal (lath) and held together by mud.

A similar technique is still being used today in Wadi Du’an, a small valley in Yemen. The taste of the honey that comes from that valley is said to be far different from the ones that are commercially available in the US. Beekeepers prefer to sell the honey in cut up combs to prove the quality and purity of the product. They also sometimes squeeze the honey into bottles and it’s not uncommon to see bits of the comb or a bee’s wing floating inside. This might seem a bit odd to most buyers but it’s an indication that the honey was produced locally. A pound of the honey sold here can cost up to $50.

Bee keepers in Uganda still prefer to use traditional beekeeping methods. The Romans used a hollow log to house bees in 150 A.D. and the practice still lives on in some areas in the Middle East, Asia and Africa. The original tree hives were done with live trees and the keepers would cut holes into them to remove the honey. This practice was stopped because the value of timber was being affected so there was a shift to beekeeping in hollowed logs that were already cut.

In the United States red gum trees were typically used as hives. The hives were called “gums” because of the tree’s name.

One recorded reason for farming honey in hollowed out logs was to stop an old practice where people would sneak into another’s property to steel honey from the trees on those lands. The holes would then be closed up and it would be difficult to discover that their honey was actually stolen until it was far too late.

With this type of beekeeping, in order to take out the bees from the tree hive, the colony will have to be destroyed. The bees are normally smoked out with sulfur and the nest is cut open.

Bee skeps are hand-woven basket type housings that were popular in Europe for about 2000 years. It was used top down with the bottom part open and there was no structure on the inside of the basket so the bees had to make their own compartments.

Although these were easy enough to make, there was no practical way of taking out the honey. Most of the time the bees were smoked out with lighted sulphur which killed them before the honey could be extracted. It’s also very difficult to monitor the status of a hive using a skep because there was no way of looking inside without driving the bees out first. This made the use of skeps illegal in some countries including the USA.

Modern designs of skeps now usually have a cap on top of it to allow beekeepers to look inside and take out some of the honey without the need to destroy the whole hive. Other designs even have glass parts in them to make them more visually and commercially attractive.

The langstroth bee hive is one of the more common hives that beekeepers use. The reason it’s so popular is because of the removable honeycomb design that is built into it. These allow the hive to be managed in a way that was impossible before and makes the harvesting of honey so much easier.

The hive’s design is largely credited to Lorenzo Langstroth. He discovered that a 1 cm space left inside the hive will not be patched up by the bees. He called it “bee space” and it was based on this discovery that he was able to design a hive where the honey combs could be removed. Langstroth’s design paved the way for modern beekeeping practices and his book “The hive and the honey bee” is still an authority book when it comes to beekeeping even today.

5. The Top-Bar Hives and the Barefoot Beekeepers

Kenya- hives or Top-bar hives use the same design as the Langstroth ones in that they also take advantage of the “bee space.” They are designed in such a way that the comb hangs top down and can be pulled out from the top when necessary. This forces the bees to create separate areas for their brood and honey storage.

This design is a lot less expensive to make and use than most. It allows the beekeepers to remove the honey without harming the bees making it one of the more organic and cost friendly beehives available.

National Hives are the most common hive types used in the UK. Their design makes it easy for beekeepers to buy colonies from each other because they’re easy to transport. Some box designs are too small however so beekeepers have added a super to the box with the brood in them. This increases the space for the queen and is better overall for bee management. The only downside to this design is that the lack of structure makes it difficult to find the queen sometimes.

William Broughton Carr invented the WBC hive and it’s considered the classic hive design. You’ll see it in pictures, paintings and in gardens as ornaments. The design is decent because it keeps the bees at the appropriate temperatures despite the seasons but there aren’t many beekeepers that use WBC hives anymore. This is mainly due to the complicated design of the hive and the need to remove the external layer before the beekeeper can examine the hive. These make management and transport of the hive extremely difficult when there are bees in them.

The Darlington Long Deep (DLD) hive was a design created by Robin Darlington. He is a beekeeping enthusiast and his goal in creating the hive was to produce a synthesis of all the basic principles of beekeeping design. The DLD is very bee friendly and its size makes it possible for two colonies to live at both ends of the hive.

Being a hobbyist, the hive is designed with ergonomics in mind. The weights of the box and the liftable parts are measured exactly to produce the least possible strain.

9. The Beehaus for Rooftops

The beehouse is probably the most modern beehive design used today by urban beekeepers. It’s made out of plastic and was designed for city use, particularly on the rooftop of houses. If properly handled even beginners can produce as much as 20 kilograms of honey per year. The beehouse hive is a perfect complent for houses that have rooftop gardens.

Omlet is the company that launched this revolutionary plastic design which is an offshoot from its city chicken raising idea.

A Warré hive uses the same idea as the langstroth hives in the sense that the layers are also stacked. Essentially the layers are just stacked on top of each other and whenever more space is needed another frame or box is added to the bottom. The technical term for this expansion is called “nadired” and it is done without opening the hive to retain the heat. In fact, the hive is opened only once a year during harvesting to ensure that the internal temperature doesn’t change too much.

The hive was named after the original designer Abbe Emil Warre. He wanted to create a hive that was bee-friendly, simple and economical so he came up with this one.

11. Beepods Bring Back an Old Design for Better Beekeeping

Beepods are designed to keep both the beekeepers and the bees happy. The aim is to create a hive that’s easy to inspect and manage, one that doesn’t disrupt the bees too much. Beepods make it easy for keepers to check for pests, the general health of the bees and to ensure quality honey production.

The top-bar configuration of beepods is what makes it different from other designs. It’s easy to inspect and maintain without too much compromise on the bees’ activities because only sections of the hive are exposed at any one time.

Frotnum & Mason produces distinctly flavored honey with almost every batch they come out with. The reason for the unpredictable flavors is the wide variety of flowers that are available to the bees.

The beehives they use are especially unique and not to mention, expensive. Other than their rooftop location, the hives have a mix of Chinese, Roman, Mughal and Gothic design. The bees are given a lot of internal space to move around in and the outside of their hives is coated with eau de nil paint with a bit of gold detailing.

A bee smoker is an essential tool for any beekeper and has become a staple harvesting tool for over a millennia. There are many variations of the smoker but the same principles apply for all of them. The tool makes use of the natural effect that smoke has on bees. It disrupts the defensive response of bees making it possible for beekeepers to go in to the hive and harvest honey. Specifically, smoke triggers a feeding response from the bees since they start to think that there’s a fire and have to consume as much honey as they can in anticipation of an abandonment of the hive. This results in a distended abdomen which in turn makes it difficult for the bees to use their stinger.

The invention of the modern day smoker is credited to Moses Quinby. He came up with the single handed smoker, the type that most beekeepers use today. However the most used smoker in America and the UK was designed by T.F. Bingham. It was mainly based on Quinby’s design though.

Alternatives to the smoker, liquid smoke and cold smoke, have also recently become popular. The former is a liquid concentrate that is sprayed on the bees/hives while the latter is a type of “smoke” contained in aerosol cans.

When honeycombs are taken from the hive, the honey is normally sealed by wax. The bees do this to ensure that the honey is properly contained. So naturally uncapping the honey combs is a necessary process of harvesting. Typical uncapping process makes use of a heated knife, either by hot water or steam. Electric uncappers are also used to speed up the process.

Two of today’s accepted uncapping methods are done with the use of Cowan’s uncapper and the one made by Dakota Gunness. Cowan’s device uses stainless steel knives and a gravity slide feeder. The knives are heated by either steam or electricity to make uncapping easier. The uncapper designed by Dakota uses rotating flails that cut the capping as the comb is made to pass through the flails by a conveyor.